My take on the Greek crisis: An article on Guardian

I was interviewed by Larry Elliott from Guardian, who has recently written a very interesting article about the situation in Greece, titled Troubled Greece: fears of 'first domino' to fall as austerity is counted a failure.

Here's my opinion as it is presented in this article:

"Dimitris Tsigos, founding president of the Hellenic Start-up Association and founder of a software company, says that Greece has plenty of things going for it: a well-educated workforce, plenty of sun that attracts tourists and can be a source of solar power, and a thriving biotechnology sector. But he believes the country needs a clean break with its bad old ways.


For many years, Tsigos said, graduates aspired to working in a public sector that was expanded to cater for them. "This vision has collapsed with the crisis and now people have to make up their minds what they will do. Emigrating is one option. To stay here and fight is another. Doing that in a zero liquidity environment is challenging but that's what we are trying to do."


The crisis, he says, has hit the poor, the wage earners and parts of the middle class but not Greece's oligarchs, ship owners and bankers who control the media and have had close links with the parties of the centre-right and centre-left that have dominated Greek politics since the mid-1970s.  "Greece is a country governed by a group of gangsters. Either the Greek people will kick the gangsters out or they will have the fate they deserve."


Defence spending, where corruption has been endemic, said Tsigos, has so far escaped the swingeing spending cuts imposed on health and education. "Corruption is everywhere. You must think of a Latin American or African model to understand Greece."" 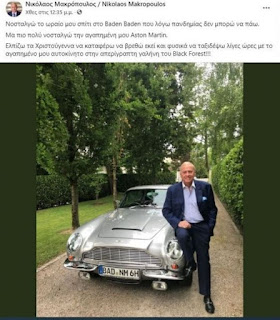